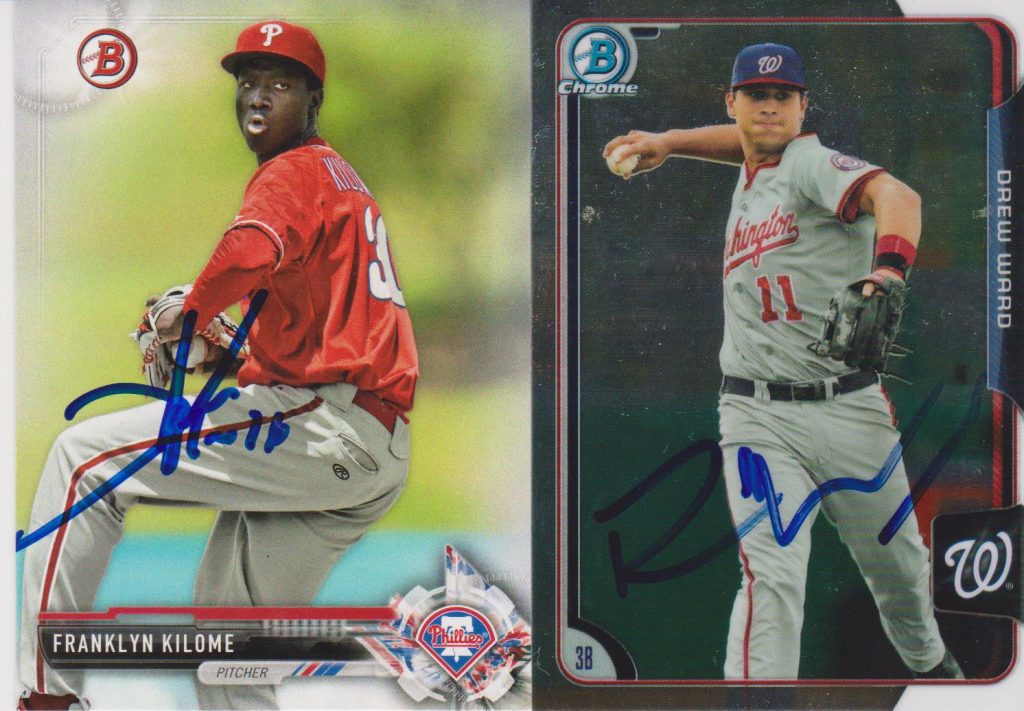 I’ve talked before about how Reading is a great place for autographs, but this time, I decided to go for home team autographs instead of away team autographs.  The Fightin Phils also need to walk through the concourse to get to the field, but it’s a little more controlled as they have someone manning a gate to allow them field access.  What I don’t understand is why they have an additional temporary fence beyond a chain link fence where the players walk through.  So what this does is provide two pathways to the field, one for the players and another for others who need field access.  As a result, fans are too far away from the players to try to get autographs, unless the players walk through the pathway and then come back around.  At first, I wasn’t sure which of the two paths the players would take, but every player took the players only path and a few came back along the fence to sign autographs.

On the other side of the player pathway are the stands and standing there greatly increases one’s chances of getting an autograph.  It’s tough to fit more than five people here, but it’s better than hoping the player will come back around.  I chose the Reading side over the Harrisburg side because I had more cards of their players, but it didn’t work out as well as I had hoped.  I did manage to get an autograph from Reading Pitcher Franklyn Kilome, which was the player I most wanted to meet as he is ranked as the Phillies #8 prospect.

Since I committed to the Reading side before the game, I decided to go to the Harrisburg side after the game.  I made my way over before the 9th inning started, although just after the Senators game up the game-winning grand slam.  I saw a number of people standing there waiting for the team already, which was a little surprising.  And even though the team was dejected after a tough loss, I did decide to see if anyone was willing to sign.

One thing that makes getting autographs at games difficult is that there is a fairly small window to get a player’s attention as they walk by.  I noticed that the rest of the people were making a minimal attempt if any to grab their attention, but maybe they thought the players would just see them and walk over and offer to sign autographs for everyone.  The one issue I had was that there was one fan who was asking any player that walked by for a broken bat.  I hadn’t seen anyone do that before, but it also distracted the players enough that I missed the opportunity to ask some if they were willing to sign.  I was also shocked that the Nationals top prospect, Victor Robles, walked through and nobody really made an attempt at an autograph.  Yes, that would have been me if I didn’t get his autograph at a game the previous month.  But I did manage to get an autograph from 3B Drew Ward, the Nationals #18 prospect.  Interestingly, I managed to get an autograph from him at the end of a Blue Rocks game, two years prior, but I do appreciate his willingness to sign after games.